The Caffeine in a Can of Mountain Dew vs a Cup of Coffee!

This is how much caffeine is in a can of Mountain Dew compared to a cup of coffee:

Even the Mountain Dew Amp Original has much less caffeine (142 mg per 16 oz.) than espresso of equal proportions as one 1-oz. shot contains 63 mg of caffeine.

Although no one would drink 16 ounces of espresso, ounce for ounce coffee still contains much more caffeine than any Mountain Dew.

I’ve spent hours researching this topic in great detail and came to the conclusion that coffee contains much more caffeine than popular soft drinks.

To highlight the caffeine differences between coffee and Mountain dew, in this article I’ll cover:

Caffeine in Coffee vs Soda

Coffee boasts a considerably higher dose of caffeine than soda. Coffee vs Soda: The Health-Oriented Debate

Coffee is definitely a much healthier option than soda.

Coffee and caffeine offer a myriad of potential health benefits such as:

If you drink coffee in moderation it will always be much healthier than soda.

Keep in mind that soda is full of sugars and empty calories that make you crave even more sugar.

And according to CDC guidelines, sugar-sweetened beverages consumption can lead to a variety of health problems. 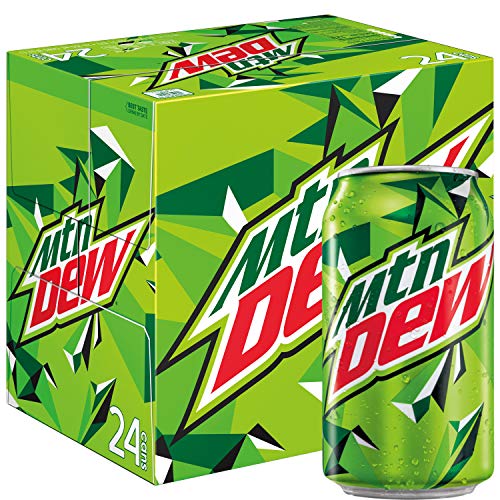 Mountain Dew is Not that High in Caffeine

The amount of caffeine in MD isn’t that high, compared to other highly caffeinated beverages.

If we compare Mountain Dew to other soda drinks it contains significantly higher amounts of caffeine (the Coca-Cola Classic has only 34 mg of caffeine per 12 oz).

It is fairly high for a soft drink, yet not high at all when compared to highly caffeinated drinks like espresso.

According to the Center for Science in the Public Interest’s caffeine charts, the different Mountain Dew drinks have the following caffeine content:

Compare this to around 160 of caffeine in a standard 8-oz cup of coffee and you’ll quickly realize although MD boasts a decent amount of caffeine, it’s still quite modest in comparison to java.

34 oz of Mountain Dew contains roughly 150 mg of caffeine but ingesting this much soda is far from healthy due to all the extra sugar. Consuming too much MD or soft drinks, in general, comes with several side effects such as:

That’s why you should avoid drinking excessive amounts of both caffeine and sugar to stay healthy.

That’s because 54 mg can be considered a small dose of caffeine and this is how much caffeine a regular can of Mountain Dew contains.

And anything beyond 400 mg can be considered hardcore and not for everyone.

Extreme Amounts of Caffeine can be Deadly

In 2017 the Washington Post reported that a teenager died of a caffeine overdose.

Apparently, the young man named Davis Allen Cripe had a large Mountain Dew, a McDonald’s latte and a 16 oz energy drink within a span of two hours.

But it was not about the MD, or energy drinks or McDonald’s’ coffee.

The real culprit was the unhealthy amount of caffeine that caused dire consequences.

But here’s how much caffeine the most popular soda drinks contain, according to the University of Utah:

Note that these specific amounts of caffeine for the different types of coffee are all based on information from USDA’s FoodData Central databse.

The US Food and Drug Administration (FDA) cites 400 mg of caffeine as the maximum safe amount that you can consume.

This equals roughly 4-5 cups of coffee as an amount of caffeine that’s typically not related to any dangerous side effects.

But you have to take into account that different people metabolize caffeine at different rates and some are more sensitive than others.

Some medications and specific conditions can make you more sensitive to the effects of caffeine.

Moreover, the FDA recommends that pregnant or breastfeeding women (or those trying to become pregnant) and people concerned about caffeine’s interaction with a certain condition or medication need to contact their health care provider regarding caffeine consumption.

So, the amount of caffeine in a cup of coffee is significantly higher than in a can of Mountain Dew.

And coffee is a lot healthier than any soda as it doesn’t contain high levels of sugars and acids.

So the overall ‘winner’ would be coffee, although it still has to be consumed in moderation.

Now, are you a fan of Mountain Dew?

Have you ever tried the Mountain Dew and espresso cocktail?

Leave your comments below!