Okay, so some people claim that dark roast is the go-to coffee roast for the maximum caffeine kick. While others believe that the lighter the roast, the higher the caffeine content, regardless of the types of beans or brand like certain Robusta coffee brands. So I have decided to help you out by answering – does dark coffee have more caffeine?

Both dark and light roast coffee has pretty much the same amount of caffeine.

That’s because caffeine is incredibly stable at high temperatures (during roasting) resulting in ridiculously tiny differences in the caffeine amount (if any) between these two roast types.

Thus, you’ll probably need a lab to adequately examine the impact that roasting has on caffeine.

Honestly, It all boils down to one thing – if you want more of that caffeine kick, just add more coffee!

The only real difference in caffeine between the two would come when measuring dark vs light roasts.

If using a scoop for scoop measuring method, light roast generally has more caffeine because light beans have a denser structure.

Dark roast coffee, on the other hand, will have a higher caffeine content gram for gram since darker roasts have less mass than their lighter counterparts.

But hey, I realize that this is probably a bit too scientific for most people.

Just remember that both dark and light roasts have about the same caffeine proportions!

What About The Type Of Coffee Beans Used – Arabica Or Robusta For The Strongest Caffeine Kick?

Robusta is hands down the best option if you want more oomph in terms of extra caffeine.

Although Arabica is considered tastier and of higher quality, Robusta would be more suitable for those of you who only care about the caffeine kick.

In fact, you’ll find x2 (twice) more caffeine in Robusta in comparison to Arabica for the same amount of coffee!

The main difference between the two most popular coffee species comes from the varying caffeine % in each.

And while it doesn’t take a rocket scientist to figure out that Robusta packs more caffeine punch, there’s a tradeoff.

This tradeoff is the fact that Robusta beans result in coffee that has a more bitter flavor.

Arabica, on the other hand, gives you a much nicer to drink coffee and it’s the coffee bean type most people prefer.

Sure, Robusta might not be as delicious, but it’s cheaper and it offers more caffeine gram for gram. Light Roast vs Dark Roast Taste – Is There Any Significant Difference?

You bet. Light roasts have more acidity, they’re not necessarily balanced and their taste tends to be more floral and citrusy.

Dark roasts, on the other hand, are bold, rich, more balanced and with some chocolatey notes.

Besides, as you might imagine, medium roasts sit somewhere in the middle, with a good balance of body and acidity.

Oh, and please don’t assume that light roast coffee is superior to dark roast or vice versa, in terms of taste – each coffee roast type caters to different folks’ tastes!

But to give you an even better idea of how different these two roast types are, here’s a more detailed look into dark and light coffee roasts:

But if you ask me, going for a medium roast might be your best bet if you’re looking for a more balanced roast type.

Medium roasts sit in-between the original flavor profile of the coffee and a fuller body.

That’s because the medium roast level results in a delicate and well-balanced coffee might be rich, bold and citrusy at the same time.

Which Coffee Has The Most Caffeine?

That’s because these coffee blends were made using only carefully selected coffee beans and optimal roasting conditions for the biggest caffeine punch.

Also, don’t forget to check the best coffee on Amazon at the moment.

Anyway, here’s a breakdown of the caffeine content of the strongest and most popular coffee drinks:

While we’ve all heard that cold brew coffee packs the most punch, that just ain’t the case.

Yes, that typically results in higher caffeine concentrations, but it’s just not enough to beat the top dogs when it comes to sheer caffeine.

And these are good ol’ espresso and super highly-caffeinated coffee blends. 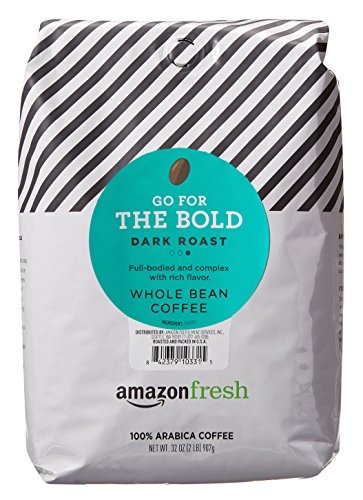 Dark Roast Coffee Health Benefits… Are There Any?

It sure does and supposedly even more so than light roast coffee!

A relevant study courtesy of the Molecular Nutrition & Food Research journal shows that dark roast is superior to light roast.

What’s more astonishing is how quickly the people who participated in this research experienced health benefits.

All of the aforementioned benefits i.e. improved antioxidant status and a greater weight reduction were achieved after only 1 month.

And on top of that, I’ve got some good news for all you stomach sensitive coffee lovers out there.

Dark roast coffee should be easy on your stomach, more so than lighter roasts!

The reason for that is a chemical named N-Methylpyridinium, which results from the dark roasting method.

And N-Methylpyridinium possesses the ability to limit the amount of acid your stomach produces.

So, if your stomach is sensitive but you love your java, then give dark roast coffee a try! 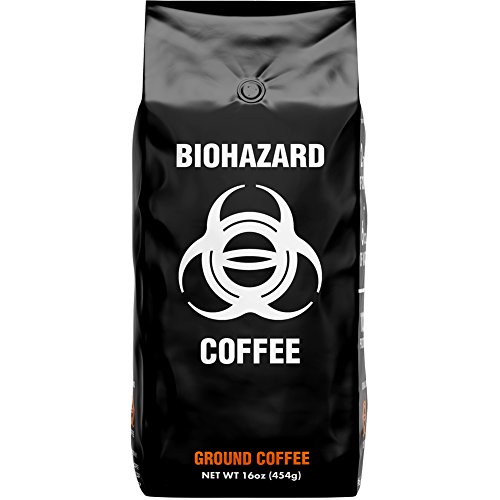 Which Brand Of Coffee Has The Most Caffeine?

Biohazard Coffee , thanks to their dark roast ground coffee that offers a mind-blowing 928 mg of caffeine per dose (12 oz)!

Also – sorry Death Wish Coffee, but your coffee isn’t quite “The World’s Strongest Coffee” as you claim.

In fact, let’s compare the caffeine content in the ground coffee of these two coffee brands:

So there you have it folks, Biohazard Coffee is the brand that offers the most caffeinated ground coffee on the planet through their organic, dark roast Robusta product.

It has roughly 200 mg more caffeine than Death Wish Coffee per a 12-oz serving so it’s not even close.

Does Starbucks Dark Roast Have More Caffeine Though?

Nope, not even the most caffeine-packed dark roast Starbucks coffee can match Bioharad Coffee’s caffeine behemoth.

The dark roast coffee with the highest caffeine content that Starbuck’s has is the Featured Dark Roast coffee drink and it has over 3 times less the caffeine.

In fact, a tall (12 oz) cup of Featured Dark Roast has a mere 195 mg of caffeine versus Biohazard’s absurd 928 grams.

Caffeine In Coffee – How Much Caffeine Do You Get In A Cup Of Normal Coffee?

You’re getting around 95 mg of caffeine per an 8-oz cup of regular coffee.

However, espresso packs a much bigger punch with 64 gm of caffeine per shot (1 oz).

And if you want even more oomph, then a double shot of espresso will give you 120+ mg of caffeine or those groggy mornings!

Apparently, dark roast coffee and lighter roasts have just about the same amount of caffeine.

Thus, even if some caffeine is lost during dark roast methods, it’s minuscule at most.

But I’d now want to know which roast method do you prefer for that extra caffeine kick and why – dark roast or light roast coffee?

Leave your answer in the comments below!