The vast majority of commercial coffee across the world consists of Arabica or Robusta beans. But do you know what the third most popular, yet mysterious type beans is? Well, that’s one of the lesser-known coffee bean varieties known as Liberica. And today, we are shedding light on the question – what is Liberica coffee beans?

Liberica coffee beans are the third most widespread type of coffee beans on the globe, after Arabica and Robusta.

These beans are large and they have an irregular-shaped and they boast a fruity coffee aroma with a dash of a floral and woody taste.

Liberica is primarily grown in West Africa (Liberia) and Asia since these coffee beans prefer these types of climates.

Also, Liberica is known for having a complex and flavorful blend that’s unlike any other coffee type,

Let’s now learn more about some of the rarest coffee beans out there!

The History of the Liberica Coffee Plant

The Liberica coffee plant is native to Western Africa namely the country of Liberia, hence the name.

And from Liberia and Western Africa the Liberica coffee plant then expanded across the world – starting during the 1890s.

It was around that time that Southeast Asian countries like the Philippines and Indonesia emphasized the cultivation of the Liberica plant.

One of the reasons for this was the disease (coffee rust) that triggered the mass dying of Arabica plants, which sort of paved the way for Liberica to grab a part of the market share.

Arabica coffee plants weren’t resistant to Hemeileia vastatrix, which is the fungus that caused plants to lose their leaves and omitted the production of coffee beans.

However, Liberica is accustomed to high temperatures and hot climates, as well as growing at low altitudes, making Liberica plants much tougher as they were able to fight off diseases and pests.

Sometime during that time, the USA encouraged the production of Liberica beans in the Philippines.

Thus, the Southeast Asian country became a prominent coffee supplier, which as a result propelled their economy.

Yet, the outbreak of the fungus didn’t last forever and the Arabica plants eventually started recovering and this basically made Liberica plants take a back seat.

Liberica Beans During the USA-Philippines Conflict of the 1940s

In 1946, the Philippines gained independence from the USA, which caused quite the tension between the two countries.

The USA’s response to their request for removing military bases pushed the country into a steep decline as the production and trade of sugar, rice, coffee, and coconuts literally stopped.

The efforts towards re-planting Liberica beans were mostly in vain due to the prevalent production of Arabica beans.

Liberica plants grow up to 20 meters in height, mostly in the jungles.

Moreover, Liberica’s beans that are larger than most other coffee bean varieties.

These plants also boast low rates of cultivation and fall into the category of endangered species.

Luckily, the wild and harsher environments Liberica plants were growing in prevented workers from sugar cane fields from exterminating these now rare and precious coffee beans. In fact, it blends all the features plenty of coffee aficionados appreciate, as it is full-bodied, caffeinated, and inherently bitter.

Although the West still hasn’t fully recognized the unique taste that Liberica coffee provides, it is nonetheless very popular in certain countries.

And if you prefer instant coffee and other budget-friendly options, you might also fall in love with Liberica.

There’s a good reason why Liberica coffee takes around 3% of the global coffee market nowadays – it’s just that it’s quite rare and not that easy to get your hands on it.

What are the Differences Between Arabica, Robusta and Liberica?

The typical taste profile of Liberica and Robusta coffee is quite similar, while Arabica is slightly more different than these two coffee bean types.

Coffee connoisseurs know that Robusta and Liberica tend to have a dark, earthy and bold flavor, while Arabica generally has a softer and sweeter taste.

Regardless, Liberica beans have a smoky smell, similar to durian, although you can certainly feel some of the fruity undertones that these coffee beans have.

Out of more than 100 coffee species, Arabica, Robusta, and Liberica coffee are the main commercial varieties and here’s what makes each of them unique:

Arabica beans have a sweeter and softer taste with fruity and sugary tones and a delicate acidic flavor.

Subsequently, these darker and oval-shaped coffee beans can be typically found in Brazil, Indonesia, India, and Africa (Eastern and Central).

Although this type of coffee beans is not overly-caffeinated but is still able to provide light to medium-bodied cups.

And to enjoy the delicacy of Arabica coffee to the fullest, grind whole roasted beans at home right before you brew them for optimal freshness.

Robusta beans make for full-bodied cups that carry an acidic and bitter taste with nutty and chocolate notes.

Additionally, these coffee beans are pale and dry in appearance and they have a circular shape.

Robusta also blends well with milk and sugar, which is why this coffee bean variety is ideal for making the iced coffee we all love during those hot summer days.

Liberica coffee beans tend to have a slightly smoky and woody taste with floran and spicy hints and it’s typically a little bitter.

However, based on the experience of Liberica fans, Liberica beans usually have a mild burnt taste (sort of like “liquid tobacco”) when not brewed correctly.

In terms of appearance, the Liberica beans are easy to spot due to their teardrop, asymmetrical shape.

Furthermore, their aroma is as strong as the aroma of Arabica beans, thus Liberica makes for great espresso. 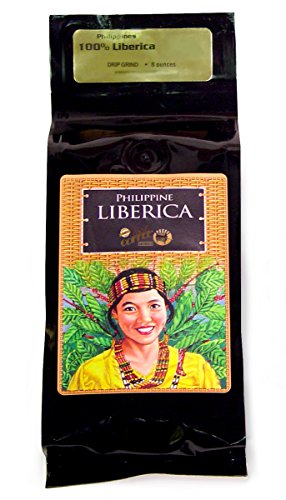 Where to Buy Liberica Coffee Beans?

The most convenient place from which you can buy Liberica ground coffee is obviously Amazon.com .

And since you’d like to brew some Liberica at home, since it is so rare, it would be best to just buy ground Liberica coffee.

Simply grind the desired amount per one serving to ensure maximum freshness.

With that being said, the overall number of coffee producers on Earth working with Liberica plants is low.

Regardless, you can still find these specialty Liberica beans in the following countries:

Malaysia is the single largest Liberica bean producer out there.

This is the country where you’ll be able to find the strongest and most authentic taste of Liberica coffee.

Traditional coffee shops in Malaysia called kopitiams are selling these rare beans and you can brew Liberica coffee yourself as well in these shops.

The Philippine provinces Cavite and Batangas are known for growing Liberica beans, which make 4% of the country’s coffee harvest.

You will find it locally under the name of the Barako coffee of Kapeng in numerous places across the Philippines.

The European colonialists brought the Liberica beans to Indonesia where Liberica can still be found today.

Although Robusta plants have gained more popularity since they require less maintenance, the provinces of Jambi and Riau are still producing Liberica beans.

And you can them at most smallholder shops.

Even though Liberica coffee beans are relatively unknown (they constitute only about 3% of the global coffee market), they still possess some unique flavor and taste characteristics.

Liberica coffee offers an exceptional aroma with hints of floral, earthy and smokey flavors and while some coffee lovers find it too strong, others consider Liberica is a revelation.

If you’re asking us, we would recommend spicing up your regular coffee routine with around 10% of Liberica coffee.

Not only will you achieve a different taste profile to break away from the everyday routine, but you’ll be able to see yourself what Liberica coffee beans are all about.

Now, have you ever had a chance to try Liberica coffee?

We would like to hear about your experience with this specialty coffee beans so leave a comment below!